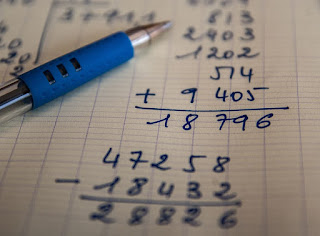 Now let us discuss some arithmetic conversion.  Let us see what is octal and hexadecimal numbers used by digital computer.

The conversion of from binary to octal is easily accomplished by partitioning the binary into group of three digit each, starting from binary point and preceding to the left or to the right.

The corresponding octal digit is then assigned to each group.  The following  example illustrates the procedure.

The corresponding hexadecimal (or octal) digit for each group of binary digits is easily remembered after studying the values.

Binary numbers are difficult to work with because they require three or four times as many digits as their decimal equivalent .  For example, the binary number 111111111111 is equivalent to decimal number  4095.  However, digital computers use binary numbers and its sometimes necessary for human user to communicate directly to with the machine by means of binary numbers.

One scheme that retains binary  system  in the computer but reduces the number of digits human must consider utilizes the relationship between  binary number system and octal and hexadecimal system.  By this method, the human thinks of the number of octal and hexadecimal  numbers  and performs required conversion by inspection when direct communication by the machine is necessary.  Thus the binary numbers 111111111111 is 12 digit and is expressed in octal as 7777 (four digits) and while it is expressed in hexadecimal as FFF (3 digits).

During communication between people (about binary numbers in the computer), the octal or hexadecimal representation is more desirable because it can be represented in third or quarter of number of digits required for equivalent binary number.

When the human communicates with the machine (through console switches or indicator lights or by means of programs written in machine language),  the conversion from octal or hexadecimal  to binary and vice versa is done by inspection by the human user.

Thank you for reading

TROUBLE SHOOTING FOR NO DISPLAY IN PERSONAL COMPUTER.

May 06, 2021
TROUBLESHOOTING FOR NO DISPLAY FRIENDS TODAY I AM GOING TO TELL YOU ABOUT THE CORRECT STEPS TO BE TAKEN IN ORDER TO REPAIR THE COMPUTER IF THERE IS NO DISPLAY.  MEANS THAT WHEN YOU START THE COMPUTER, THE CPU FAN AND SMPS FAN IS RUNNING ALL LED IS ON BUT THERE IS NO DISPLAY IN THE MONITOR. STEP 1  START THE COMPUTER AFTER 30 SECONDS  PRESS NUMLOCK KEY COUPLE OF TIMES. IF THE NUMLOCK LED IS GETTING ON AD OFF,  THEN THE PROBLEM IS WITH THE MONITOR.  IF THE NUMLOCK LED IS ON OR STEADY ON OR STEADY OFF THEN THE PROBLEM IS WITH THE CPU. STEP2--> SUPPOSE THE PROBLEM IS WITH THE MONITOR  1) CHECK THE AC WALL OUTLET (PLUG) AND POWER CODE WITH THE LINE TESTER OR MULTIMETER.  NOW CHECK THE POWER BUTTON IS ON AND THE BRIGHNESS EVEL OF THE MONITOR.   2) IF THERE IS NO POWER  IN THE MONITOR  THEN THE POWER PANEL MIGHT BE FAULTY.  REPAIR THE MONITOR IF THE POWER LED IS ON, EJECT THE VGA CABLE  FROM THE CPU AND MESSAGE WILL APPEAR ON THE DISPLAY.     3) IF IT DOES THEN THE VGA CABLE OR
4 comments
Read more